The History Of Electric Cars and Vehicles: Are EVs A New Invention? 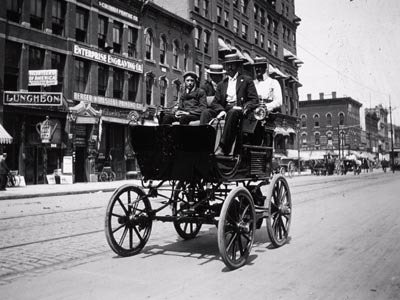 The Magic Number Is ‘100’.  No, Its Not The Latest Cricket Score, But The Number Of Years Ago Electric Cars Were First Invented!

It is easy to conclude that electric cars are a new invention, given the latest models of electric vehicles being unveiled in the global market.  The all-electric Cybertruck from the famed California based electric vehicle manufacturer, Tesla Inc., is an good example.  The futuristic design of the Cybertruck had the global social media in hysteria at its launch towards the end of 2019.

But it is not only the design and styling of the latest EVs that are futuristic, it is also the technology that sits in these silent zero-emission vehicles.  In fact, more technology than the Sputnik 1 carried on its mission towards space in 1957.  Indeed, the current introduction of technology in electric road transportation is a paradigm shift not witnessed since the space race of the mid 20th century.   Autonomous driving and autonomous cars are already being tested across the globe, with the potential of mass introduction in the medium term.

But what will surprise everyone, is that, electric vehicles, also referred to as battery-electric vehicles (BEVs) is not a new invention or even an invention of modern times. Indeed EVs were first developed more than a 100 years ago in the 19th century.  Put another way, Mahatma Gandhi was yet to be born, when inventors from various countries, to include European countries and the United States were already investing electric motors and batteries.

The first practical electric cars were built in the second half of the nineteenth century, with the first US electric car introduced in 1890.  Mohandas Karamchand Gandhi had just turned 21!

However, the uptake of electric vehicles in the early 20th century was short-lived, as gasoline powered vehicles propelled by internal combustion engines (ICE) become the preferred mode of transportation.  Todays automotive behemoths like the Ford Motor Company were founded in the first decade of the 20th century.  By then, Henry Ford had already built the quadricycle, his first vehicle powered by a four-horsepower engine. In 1908, Ford introduced the Ford Model T internal combustion engine (ICE) mass-market affordable vehicle and literally ‘put the world on wheels’.  More than 15 million Model  Ts were sold between 1908 and 1927, when production of the vehicle was terminated.

Bottom-line, manufactures chose internal combustion engines over electric cars in the early 1900s for various reasons, to include, the costs and production volumes.  A century later and the ‘battle of road propulsion technologies’ is again at the forefront.  But this time the hallmarks of the battle are not only costs and production volumes, but more importantly, emissions and environmental benefits.  The world has changed significantly in a century with the fast recognition of the harmful effects of petrol and diesel engines, to include air pollution and its wider impact on the environment.

Back to the past.  It is not definitive as to where EVs were invented or to credit a single inventor.  However, one known electric motor (small-scale) was created in 1828 by Anyos Jedlik, a Hungarian inventor, engineer, physicist and Benedictine priest. Hungarians and Slovaks still consider him to be the unsung hero of the electric motor.

Shortly after, between 1832 and 1839, a Scottish inventor Robert Anderson created a large electric motor to drive a carriage, powered by non-rechargeable primary power cells.  Through the 19th century a number of inventors were inspired to develop electric motors to include, Thomas Davenport, an American from Vermont credited with building the first DC electric motor in America (1834).  Unlike many of his contemporaries and other trying to build electric motors, Davenport did not have a background in either engineering or physics.  In fact, he was a blacksmith.

Move forward a few decades and at the end of the 19th century, William Morrison created what is believed to be the first practical electric vehicle. Morrison, another American from Des Moines, Iowa, was a chemist who became interested in electricity. He build the first electric vehicle in 1887 in a carriage built by the Des Moines Buggy Co.  His first attempt was not a great success.  In 1890, he attempted again, with more success.  12 EVs were built using a carriage built by the Shaver Carriage Company.

The batteries were designed and developed by William Morrison. The vehicle had 24 batteries with an output of 112 amperes at 58 volts that took 10 hours to recharge.  Available horsepower just under 4 horsepower.  The vehicle could accommodate 6 individuals and had a top speed of 14 mph (22.50 km/h).

Morrison’s success led to others also developing large-scale practical electric cars.  At the turn of the century cities like New York had 60 electric taxis. The first decade witnessed strong popularity for electric vehicles. However the popularity was short-lived as internal combustion engine (ICE) gasoline powered vehicles replaced the early electric vehicles.  Henry Fords success with the then ubiquitous Ford Model T was the ‘beginning of the end’ for electric vehicles.  The Model T was cheaper than the prevailing electric cars (US$ 650 Vs US$ 1,750) and could be manufactured at scale.  As they say — the rest is history.

Despite more than a century having lapsed, to a large extent electric cars today offer the same fundamental advantage over petrol and diesel cars, as was the case in the early 20th century.  EVs make less noise, are smoother to drive, require less maintenance and do not pollute like ICE vehicles.

The resurgence of modern electric cars since early 2000 has only become stronger as we come to the end of the second decade of the 21st century.   Some argue that the introduction of the Toyota Prius hybrid electric vehicle (HEV) in 2000 (worldwide) commenced the ‘second movement’ of lower emission electric transportation.

However, the phenomenal rise of a little known Silicon valley start-up, Telsa Motors, truly changed the trajectory and landscape of the gloabal EV industry.  In fact, to this date it continues to lead the zero-emission sector, inspiring millions to aspire for electric cars!

We have come full circle over the past 100 years, as electric cars are well on their way to make internal combustion engine vehicles obsolete.  A fitting end to a battle of technologies that has lasted many generations.